- March 19, 2012
Since writing this, I have found a "solution" to the problem. "Solution" in quotes because it is merely a work-around and doesn't actually solve the underlying problem.

All I did was install firefox, set it as the default browser and start over with the procedure described below.
Here's one that has me stumped. Rest assured, if I do get an answer to this problem I'll publish it here so that other people coming up against the same problem can find help.

The nature of the problem is quite simple: it is seemingly impossible to set up my flickr account on this phone. Flickr apparently uses an oAuth system similar to that of twitter, whereby the client application (the built-in flickr client in the N9 in this case) contacts the flickr API saying "I want permission to access your services". The flickr API then prompts the user (me) to log in and grant the client this permission, in response to which, the API returns a token to the client. In order to access flickr's services thereafter, the client has to present that token as proof that the user gave it permission to access their account.

So, step 1 is to go into Accounts > Add accounts > Flickr on the N9. You're presented with this screen: 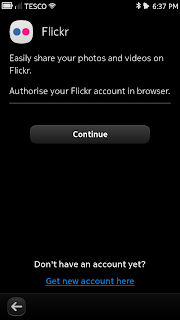 By tapping on the "continue" button, you are taken to the flickr login page: 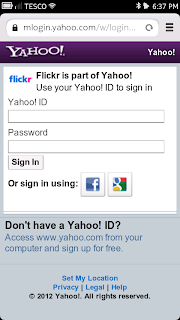 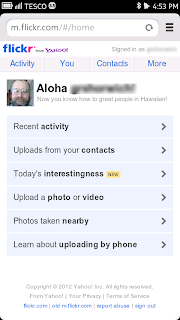 Meanwhile, the account setup process is still waiting for the auth token: 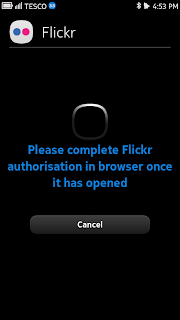 If anyone has some ideas, I'm all ears!